For our two year anniversary, Emilie got me a Kindle Touch (a pretty sweet gift). When I first turned it on and started messing around with it, I really liked the fact that because of the E Ink screen, which seems to hold its image without having to be constantly powered, the Kindle Touch never actually turns off its screen when put to sleep. Rather, it puts a "screensaver" image up that really just serves to hide whatever you were working on or reading. Furthermore, the images it uses for its screensaver are gorgeous, really making the device look awesome sitting out in a public place. Here's a picture of my favorite one, and you can actually grab the whole set in this post.

I kept happily exploring my cool new toy, including connecting it to the wifi in Emilie's apartment. I noticed that after connecting, banner ads started appearing at the bottom of the home screen (mostly advertising other Kindle books, but also including a few annoying ones from Intel (I think?) and AT&T).

I wasn't really bothered by this, and a little bit of reading in the included manual told me that I actually owned the "Special Offers" edition of the Kindle Touch, which gives buyers about a $40 price break in return for having ads appear on the menu screens.

To me, this is no big deal (actually, I sort of like the idea, especially since the ads seem pretty relevant a lot of the time). However, I got a lot less cheerful when I put the Kindle to sleep again and was presented with a whole new set of background, including these (actual images extracted from the device): 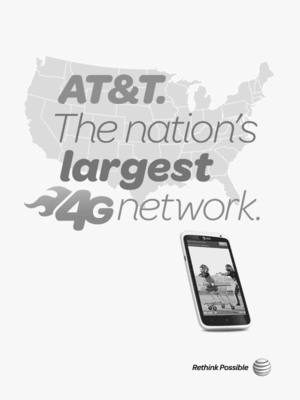 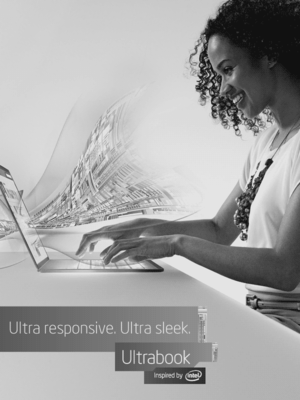 Suddenly this "Special Offers" thing seems a lot less tolerable. In fact, this is enough to make me want to leave my Kindle in a drawer when people come over instead of out on a table, just because these ads are so unsightly.

So What's The Big Deal?

If you've opened a web browser in the past few years, you've come to realize that internet advertising has very seriously become part of our lives. Think about it: when's the last time you saw a "punch the monkey for an iPod" or "you're the 1,000,000th visitor!"? Probably not for a while. Instead, you see ads that are relevant to either your (perceived) interests or to the content you're reading. This is largely because advertisers (led in no small part by Google and its AdSense) have formed a much more mature, symbiotic relationship with users than ever existed in years past. We use free services, knowing they're being paid for by ads, but we don't mind because the ads aren't intrusive or offensive most of the time, and sometimes they're halfway relevant.

Now let's evaluate the case of Amazon and its Kindle "Special Offers" program. First, despite any original good intentions or origins for the pricing model, as it stands now, the "Special Offers" version of the Kindle Touch is the only one displayed on the Amazon web site, and the product page has this to say about it: 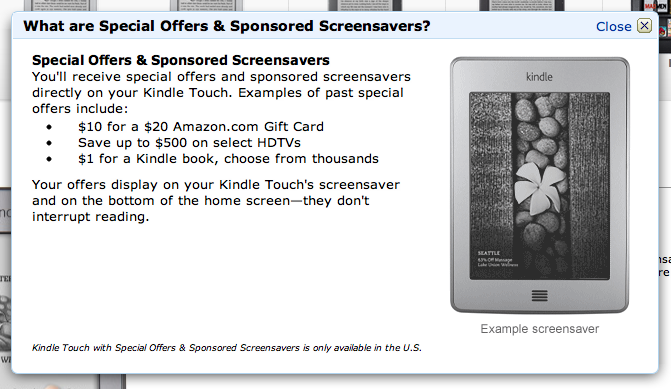 What I don't gather from reading this is that whenever I put my Kindle down, I'm going to see a giant, tasteless ad for AT&T, not some pretty wood finish with a note at the bottom about a product. (I actually found myself cycling in and out of the screensaver until I at least got to an advertisement for a book before I put it down.)

What I also don't gather is that this is a price-subsidized model. Nowhere on this page am I told that I'm actually being paid $40 to replace the gorgeous screensavers on my Kindle with ads.

What I really don't gather, and what I've really had to wrap my head around for the past few days, is that because this screen never turns off, I'm actually being paid $40 to install a permanent billboard in my apartment whenever I'm not actively reading. Consider that. What if a cell phone provider put banner ads in every text you sent, or if your car played audio commercials from external speakers whenever it was parked. I wouldn't accept $200 to have guests to my apartment force-fed advertising from companies I pretty decidedly dislike (that's the other thing: there's no feedback mechanism; you can't make ads more relevant, express your interests, or veto content. It's AT&T it's MegaCorp; it's not an option.).

After purchasing the Kindle and enjoying its pretty screensavers, then having them suddenly get replaced by unsightly ads, users can find a settings page on Amazon's website that will allow them to pay an additional $40 to remove the plague of ads they hardly realized the signed up for. This is pretty unacceptable.

What Do We Do About It?

I'm not a huge fan of "hacking" or "jailbreaking." I've been down that road of tinkering with electronics, and while it's fun in the short term, it almost always causes problems in the long term that make you really just wish you could have things back to the way they were. As a result, I'm really only game for "jailbreaking" if it solves a really significant problem. In my opinion, this is the case with the Kindle.

The Kindle Touch is a wonderful piece of hardware, and its software is pretty top-notch, too, especially for the function it serves, but the permanent ads are just too much.

Generally speaking (I am not a lawyer), there's a precedent for jailbreaking not being illegal, even if it is in violation of a terms of use contract for a device or service (especially for a Linux-based device like the Kindle). What it can cause is a voiding of one's warranty or a discontinuing of one's provided services.

For this reason, and because I'm really not a fan of this $40 shakedown from Amazon if my dissatisfaction with ads grows unbearable, I consider the Kindle Touch not to have a $40 ad removal fee, but to have a $40 optional warranty. I have no intention of paying that $40, and if that voids my warranty, so be it. I've jailbroken my Kindle Touch, taken a couple of steps to disable the ads, then left it alone, and I couldn't be happier with the results. I've got my beautiful screensavers back, but other than that the device functions as it always has. I'll cover my process of doing this in a later post for anyone interested.

So to wrap it up, here's where I stand: advertisers are welcome to bring relevant, non-intrusive ads into my life, and I won't block them. Heck, I'll probably click on a few of them. However, there is a line, and once it's crossed by, say, attempting to commandeer my coffee table as a billboard, the symbiotic relationship is broken. Plenty of people will do a little research, figure out how to turn the badness off, and resume their lives, even at the expense of a warranty here or there. By being too aggressive, advertisers and advertising platforms lose, and I hope the folks at Amazon look long, hard at this pricing model before it gets any worse.

As for me, I'm going to pretend this all never happened, that there never was a "Special Offers" edition of the Kindle Touch. Now, if you'll excuse me, I've got a book to read.