This may be old news by now, but I only just realized how great it is, so consider this my rebroadcasting of the idea:

GitHub has now become the preferred way to manage source code for programming projects. There's good reason for this: it's a really wonderful site with a great following. However, there are times when it's really not desirable to have a project completely public. GitHub provides some paid options for this, as well as educational accounts (which you should really check out if you're a student or instructor). If you've used up your free repositories or simply don't think the project at hand warrants spending money on, you need another option.

That's where Dropbox comes in. Dropbox is a really great backup/sync/file sharing service that pretty seamlessly syncs files between computers. Some time ago, Dropbox added the ability to restore old versions of files. For really simple projects, this may very well be all the version control you need. If that's the case, by all means stop reading this post and start, uh, "drop-box-ing".

For programming projects, this level of version tracking more often than not isn't enough. That's why we use GitHub. My proposal for situations where neither GitHub nor Dropbox is a good fit (and what many people are already doing) is this: let's set up bare Git repositories in our Dropbox folders and use them as our Git remotes.

Let me explain. A "bare" Git repository is one that doesn't actually have any of the repository's files shown. Instead, it just contains the guts/mechanics of the repository (the stuff that's usually in the .git directory). This is the type of repository GitHub and others use, as it's only meant to be a place to push and pull from, not to do any direct file edits or commits from.

So let's go through the process of setting up what I'm talking about. First, in your Dropbox folder, create a place for all your repositories to live (mine is a top-level folder named "Git"): 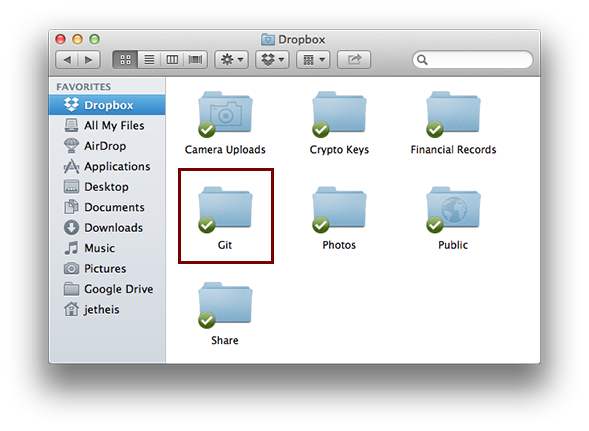 Now, in a Terminal, cd into that folder and create a bare repository:

You should see the new repository (it's just a folder) show up now: 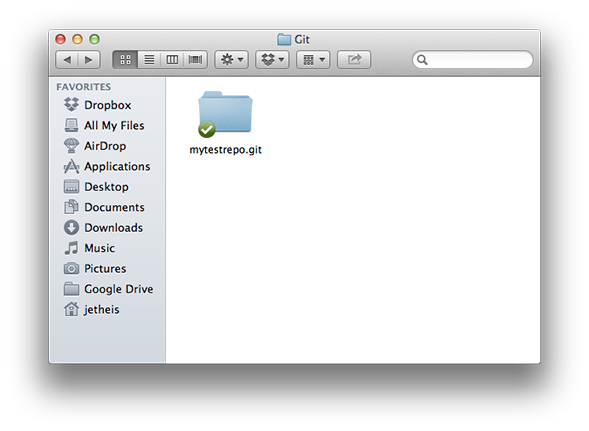 Inside, you'll see the guts of the repo: 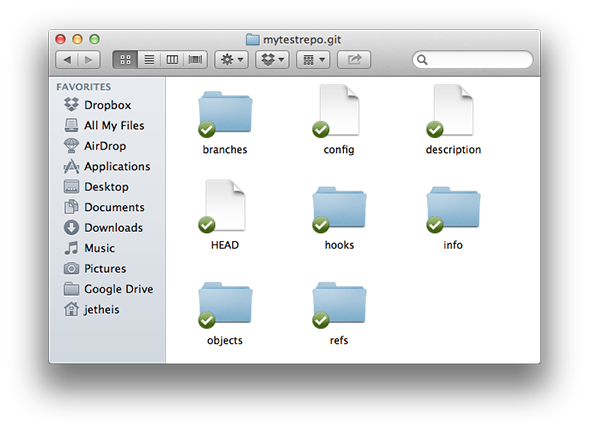 That's really all you need to do to get the bare repository set up. Let's try using it now. First let's make a sample project with a couple of commits:

Now we can hook up our new bare repository as an upstream for this one:

And push to it:

Let's try cloning from the bare repository to make sure our files and content are actually stored there. On the same computer (or another one that Dropbox syncs to), clone the repository:

Now we'll make sure we have both our current files and our history:

No surprise, everything is reflected, just like we expected. We can now push and pull (the origin remote will already be hooked up since we cloned from the bare repository, so git pull and git push are all we need to run) and have those changes synced to all Dropbox-connected computers. Pretty cool, huh?

The really cool part is using Dropbox's sharing features with these repositories. Using the Dropbox website, you can either share your whole "Git" folder with others, or, because each repository is a folder, just share a single project:

A quick note about problems before we go:

If you try to pull or push while files are still syncing, or if something gets messed up in the repository, you may see an error message like this:

The error may vary depending on what's gone wrong, but the solution in any case is the same: wait until Dropbox finishes syncing to make sure it's not just out-of-date files, then if the problem still exists, delete your Dropbox repository (mytestrepo.git) and create a new bare repository with the same name in its place:

Then push to it from the most up-to-date copy of the code:

That should restore your repository state (as long as the pushing copy of the code was entirely up-to-date).

Again, this is probably old news for some, but it's definitely worth some lip service for anyone it hasn't occurred to yet.